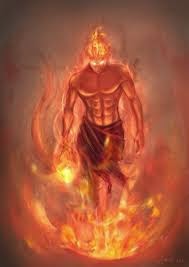 The Noble Qur’an – An-Naas 114
1. Say: “I seek refuge with (Allâh) the Lord of mankind,
2. “The King of mankind,
3. “The Ilâh (God) of mankind,
4. “From the evil of the whisperer (devil who whispers evil in the hearts of men) who withdraws (from his whispering in one’s heart after one remembers Allâh),
5. “Who whispers in the breasts of mankind,
6. “Of jinns and men.”
The Noble Qur’an – Al-An’aam 6:128
And on the Day when He will gather them (all) together (and say): “O you assembly of jinns! Many did you mislead of men,” …
The Noble Qur’an – Al-‘Anaam 6:112
And so We have appointed for every Prophet enemies – Shayâtin (devils) among mankind and jinns, inspiring one another with adorned speech as a delusion (or by way of deception)….
The Noble Qur’an – An-Nahl 16:99-100
Verily! He has no power over those who believe and put their trust only in their Lord (Allâh).

His power is only over those who obey and follow him (Satan), and those who join partners with Him (Allâh) [i.e. those who are Mushrikûn – polytheists – see Verse 6:121].
The Noble Qur’an – Ibrahiim 14:22
And Shaitân (Satan) will say when the matter has been decided: “Verily, Allâh promised you a promise of truth. And I too promised you, but I betrayed you. I had no authority over you except that I called you, so you responded to me. So blame me not, but blame yourselves. I cannot help you, nor can you help me. I deny your former act in associating me (Satan) as a partner with Allâh (by obeying me in the life of the world). Verily, there is a painful torment for the Zâlimûn (polytheists and wrong-doers, etc.).”
The Noble Qur’an – Al-Israa’ 17:61-65
And (remember) when We said to the angels: “Prostrate unto Adam.” They prostrated except Iblîs (Satan). He said: “Shall I prostrate to one whom You created from clay?”
[Iblîs (Satan)] said: “See? This one whom You have honoured above me, if You give me respite (keep me alive) to the Day of Resurrection, I will surely seize and mislead his offspring (by sending them astray) all but a few!”
(Allâh) said: “Go, and whosoever of them follows you, surely! Hell will be the recompense of you (all) an ample recompense.
“And Istafziz [literally means: befool them gradually] those whom you can among them with your voice (i.e. songs, music, and any other call for Allâh’s disobedience), make assaults on them with your cavalry and your infantry, mutually share with them wealth and children (by tempting them to earn money by illegal ways usury, etc., or by committing illegal sexual intercourse, etc.), and make promises to them.” But Satan promises them nothing but deceit.
“Verily! My slaves (i.e the true believers of Islâmic Monotheism), you have no authority over them. And All-Sufficient is your Lord as a Guardian.”
Supplication for one afflicted by whisperings in prayer or recitation…
Hadith – Sahih Muslim 5463, Narrated Uthman ibn Abul’As, r.a.
Uthman came to Allah’s Messenger May Allah’s peace and blessings be on him and said: Allah’s Messenger, the Satan intervenes between me and my prayer and my reciting of the Qur’an and he confounds me. Thereupon Allah’s Messenger May Allah’s peace and blessings be on himsaid: That is (the doing of the Satan) who is known as Khinzab, and when you perceive its effect, seek refuge with Allah from it and spit* three times to your left. I did that and Allah dispelled that from me.
smartmobilityjamnagar2015-03-13T02:56:00+00:00