Skip to content
Previous Next
Jinnat proof by hadith 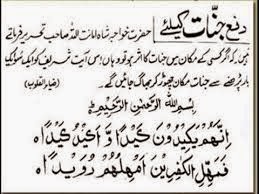 Hadith – Sahih Bukhari 4:533, Narrated Jabi bin ‘Abdullah May Allah be pleased with him
The Prophet May Allah’s peace and blessings be on him said, “Cover your utensils and tie your water skins, and close your doors and keep your children close to you at night, as the Jinns spread out at such time and snatch things away. When you go to bed, put out your lights, for the mischief-doer (i.e. the rat) may drag away the wick of the candle and burn the dwellers of the house.” Ata said, “The devils.” (instead of the Jinns).
Hadith – Sunan of Abu Dawood, Narrated Abu Sa’id al-Khudri
Muhammad ibn AbuYahya said that his father told that he and his companion went to AbuSa’id al-Khudri to pay a sick visit to him. He said: Then we came out from him and met a companion of
ours who wanted to go to him. We went ahead and sat in the mosque. He then came back and told us that he heard AbuSa’id al-Khudri say: The Apostle of Allah May Allah’s peace and blessings be on him said: Some snakes are jinn; so when anyone sees one of them in his house, he should give it a warning three times. If it return (after that), he should kill it, for it is a devil.
Hadith – Al-Muwatta 54.33
…The snake stirred on the end of the spear and the youth fell dead. No one knew which of them died first, the snake or the youth. That was mentioned to the Messenger of Allah May Allah’s peace and blessings be on him said, “There are jinn in Madina who have become muslim. When you see one of them, call out to it for three days. If it appears after that, then kill it, for it is a shaytan.” “‘
Hadith – Muwatta, 49.21
…Shaytan does not open a locked door or untie a tied knot, or uncover a vessel.
Hadith – Tirmidhi #350
Allah’s Messenger May Allah’s peace and blessings be on him said: Don’t cleanse yourself with dung or with bones for that is the food of your brothers from amongst the Jinn. [Transmitted by Tirmidhi, Nasa’i with this exception that he did not make mention of: The Food of your brothers from amongst the jinn.]
The Noble Qur’an – Ar-Rahmaan 55:56
Wherein both will be those (maidens) restraining their glances upon their husbands, whom no man or jinn yatmithhunna (has opened their hymens with sexual intercourse) before them.
Hadith – Abu Dawood 1046, Narrated Ali ibn Abu Talib
Ali said on the pulpit in the mosque of Kufah: When Friday comes, the devils go to the markets with their flags, and involve people in their needs and prevent them from the Friday prayer. …
Allah will fill Hell with jinns and men all together
The Noble Qur’an – As-Saaffaat 37:158
And they have invented a kinship between Him and the jinns, but the jinns know well that they have indeed to appear (before Him) (i.e. they will be brought for accounts).
The Noble Qur’an – Huud 11:119
Except him on whom your Lord has bestowed His Mercy (the follower of truth – Islâmic Monotheism) and for that did He create them. And the Word of your Lord has been fulfilled (i.e. His Saying): “Surely, I shall fill Hell with jinns and men all together.”
The Noble Qur’an – Al-An’aam 6:130, 131
O you assembly of jinns and mankind! “Did not there come to you Messengers from amongst you, reciting unto you My Verses and warning you of the meeting of this Day of yours?” They will say: “We bear witness against ourselves.” It was the life of this world that deceived them. And they will bear witness against that they were disbelievers.
This is because your Lord would not destroy the (populations of) towns for their wrong­doing (i.e. associating others in worship along with Allâh) while their people were unaware (so the Messengers were sent).
The Noble Qur’an – Al-A’raaf 7:179
And surely, We have created many of the jinns and mankind for Hell. They have hearts wherewith they understand not, they have eyes wherewith they see not, and they have ears wherewith they hear not (the truth). They are like cattle, nay even more astray; those! They are the heedless ones.
smartmobilityjamnagar2015-03-13T02:54:00+00:00